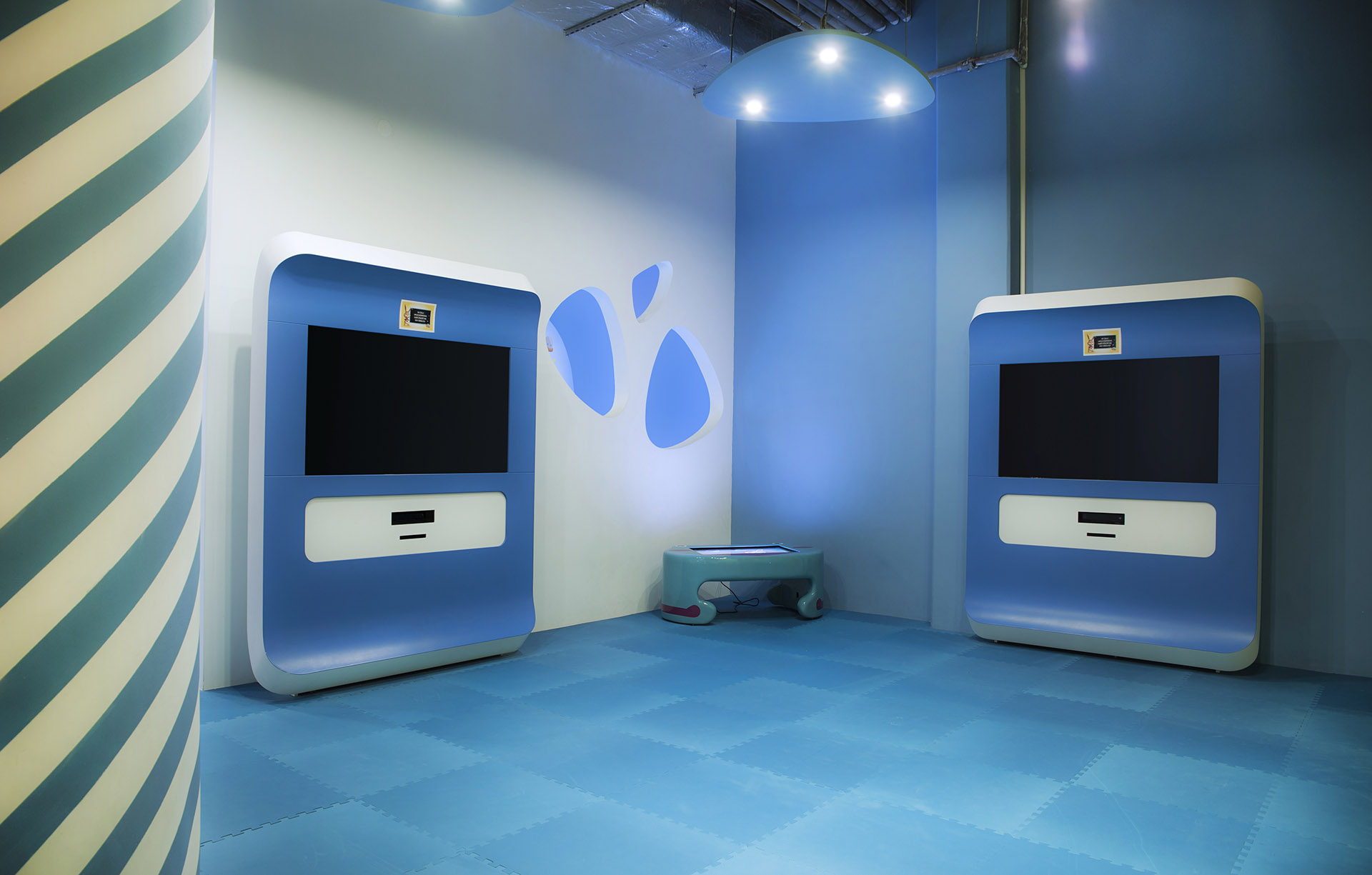 We wanted to create a distinguishable space for children which would not only be a great place to play, but also a place to educate. Therefore we introduced a concept of the ‘planets’ (rooms) and we came up with a character of Henry the Rabbit, who travels between these planets and is a guide for children.

The children can use a room just to have fun or they can use one of multimedia rooms, where they can play educational games. Each of play areas has different functionality and color theme, so it is easy for a child to see in which space he is it right now.

The main function of the playroom is to be a space where birthday parties are organized. For the needs of each room, we have designed modular furniture which helps to adjust the space to the needs of the children’s activities. The key point of each of the three birthday rooms is the throne, which towers over the other furniture and every birthday boy or girl can feel like a king or a queen.

All enclosed spaces have holes in the walls resembling rabbit burrows, or craters. This design was introduced to prevent that a child would feel isolated from other playroom spaces. This is an unusual solution, as commonly playrooms are separated from all other rooms.

Another important area was the space for parents. In this area tables and chairs were designed for parents to have some coffee, or grab a snack and get to know each other. At each table, there are three chairs which encourage a situation in which people get acquainted with each other. The odd number of chairs makes people be more willing to sit down and talk (Edward T. Hall).

We also designed puffs and benches in different areas of the playroom. The puffs are lightweight and easy to carry, so staff can move them into different rooms. Parents can sit down and observe how their children play. The benches are located in places where one might have to sit longer for example while changing shoes in the locker room, or in the multimedia room, where children’s play takes longer.

The changing rooms are also featured with modular lockers that lock up the automatic lock system. They are grouped by color to make it easier to identify the cabinet with a watch. Their size and height have been adjusted to the parents’ height, including shorter women, who are most likely to walk with children to the playroom. (The highest shelf must open by the shortest woman).

One of the difficulties was to reconcile the assembly of electronic locks in changing rooms because it reduced the space inside a cabinet. Each addition of the slab also made the place smaller. That is why we tried to adjust the size of the cabinets so that they were ergonomic, spacious, and fitted with automatic opening systems.

The plywood moldings that we could use in the project had to be suitable for children’s needs. Most of the moldings available on the market were too large, but we managed to design our own mold and produce furniture without sacrificing the ergonomics, or limiting children’s needs.